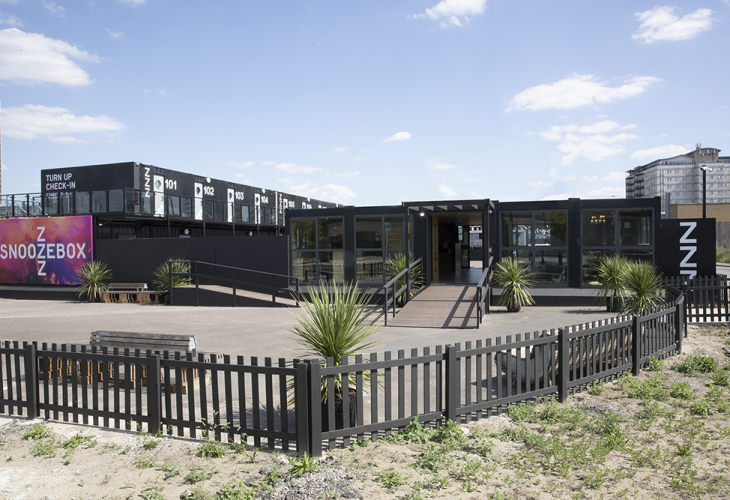 Could you be putting your vacant sites to better use?

Over the past 15 years, pop-up culture has helped transform struggling urban areas in many cities and conurbations around the world. Using existing properties has been a key part of the pop-up movement, but vacant plots of land offer a blank canvas that allows more innovative, creative and experimental temporary uses of the land.  These could be anything from offices, galleries or retail spaces to entertainment venues, street food markets and even hotels.

The benefits for landowners are many and varied. There is potential to start generating some income from the site and legitimate deployment of the site reduces both the risk of it being used for anti-social purposes and the security costs. It will also stop the site being viewed by the neighbouring community as an eyesore and help them see the temporary use as an asset with potential to help the area improve.

Temporary developments can be used as a vehicle to experiment with the commercial potential of the land. Demonstrating its value can act as a springboard to get planners and investors on board to take development forward on sites where it has stalled for one reason or another.

An old idea with new legs

The pop-up concept is hardly new. Most towns and cities are familiar with pop-up events like circuses fairs and festivals which have traditionally formed exciting parts of their annual calendar. These have acted as a dynamic stimulus bringing people into town and city centres. The Edinburgh Fringe festival is a case in point with sites all over the city being repurposed to an exciting range of uses including performance venues, outdoor markets, bars and street food stalls. Nowadays we have progressed from the traditional canvas covered wooden structures and modern pop-up structures encompass everything from inflatable and AirClad structures to adapted sheds, horseboxes and shipping containers.

Thinking outside (and inside) the box

Shipping containers (or “boxes” as they are known in the trade) are incredibly versatile components that can be deployed to create innovative structures for a wide range of purposes. Having been designed and built to withstand the extreme forces of road rail and sea transport, shipping containers are incredibly strong. They can be stacked up to nine high and come in a variety of sizes from 10 feet to 48 feet long. They are 100% recyclable and reusing and repurposing them makes them an even more environmentally friendly building component. Containers’ affordability has made them a popular element in many permanent structures. Building 1 at Dundee’s District 10 has reused shipping containers to create budget office space for start-up businesses. Their greatest asset, however, is their portability and this makes them particularly well- suited for temporary structures.

Shipping containers have also been used to create everything from bike and barbers shops to cafes, bars and grills. Some enterprising companies have fitted out shipping containers as small city “farms” where salad and microherbs can be grown to provide low carbon supplies for local restaurants. Others have created micro anaerobic digestion plants that can turn food waste into fertiliser, compost and renewable energy.

Overcoming the hurdles to temporary development

The greatest stumbling block to finding a temporary use for vacant land is the current planning process. It generally places the same requirements on temporary structures as it does on permanent developments. This makes it both costly and time consuming as we have discovered when working to help clients obtain planning consents for their pop-up uses on vacant sites in London.

As the name suggests, the beauty of the pop-up concept is the speed and responsiveness with which development can happen. It allows people with an idea to identify an opportunity and exploit it quickly. Miss that opportunity and it can vanish, so a streamlined planning system is key to opening the true potential of pop-up concepts on new sites in new locations.

Where planning policies do permit, temporary approval is often for a relatively short period - typically 28 days. Extending this to a maximum of 5 years, for example, would have a massive impact on the viability of temporary initiatives to put brownfield sites to productive use.

As we emerge from lockdown and the greatest economic downturn in living memory, governments at both national and local levels are looking to generate growth like never before. The pressure from local economic development teams to create environments that stimulate economic activity and entrepreneurship will not be lost on planners. Planning departments have the power to strategically relax planning regulation and zoning restrictions to encourage growth. Allowing the use of vacant land to provide short term solutions will be a simple way to provide facilities for new businesses to emerge and become the wealth creators of the future. With the high street in freefall, the need for progressive planning initiatives to revive town and city centres is now a higher priority than ever before. Turning vacant sites into dynamic elements which promote footfall, create employment and stimulate entrepreneurial activity can play a key part in driving resurgence.

To find out how we can help you maximise the potential of vacant land and assist planning departments in facilitating the process, get in touch. Whether you’re a landowner, developer, local authority officer or just have an interesting temporary development proposal, we’d love to hear from you.