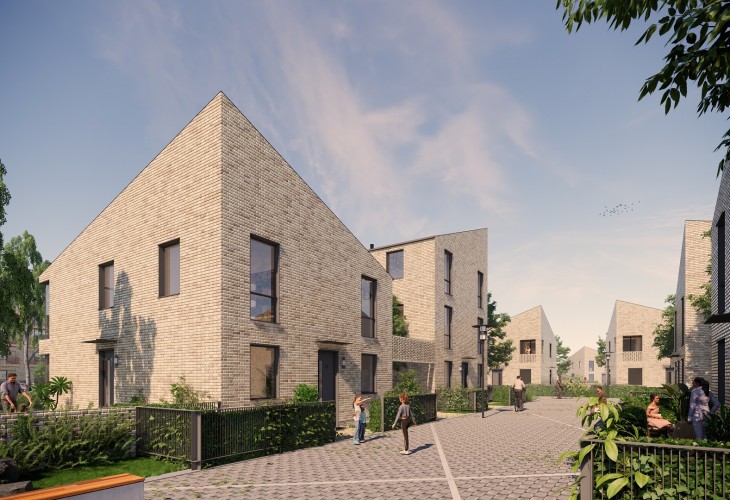 Attitudes to social housing are changing. In 2018 Britain built more public housing than at any time since 1992. The following year saw a social housing scheme commissioned by Norwich City Council pick up Britain’s most prestigious architectural accolade – the Stirling Prize. The Gold Standard project of 105 houses was described by the judges as a “modest masterpiece” and demonstrated that affordable housing can be extraordinary when innovation, ingenuity and a holistic approach to design and planning are allowed to flourish.

Aberdeen City Council have recognised the value of this approach with their announcement, early in 2020, that all their housing would be commissioned to the Gold Standard. This is a hugely welcome development for us at Halliday Fraser Munro where we have long championed the value of building Gold Standard homes that surpass the basic requirements of building regulations. We’re also delighted to see Glasgow City Council making moves in the same direction and expect to see other local authorities following this lead.

Gold standard homes aim for a minimum 27% reduction in carbon dioxide emissions which is achieved partly through using renewable energy to provide 50% of hot water demand. Of course, the Gold Standard goes much further than that. It incorporates other carbon saving measures including more effective insulation and air circulation techniques. Combining renewable technologies with state-of-the-art energy efficiency has the potential to significantly reduce household running costs. In the case of the Goldsmith Road development in Norwich, which was designed and built to Passivhaus specifications, residents now enjoy 70% lower fuel bills. But energy efficiency is only part of the story. New Gold Standard homes must include better outdoor space, larger rooms, additional storage for bikes, prams or mobility scooters, including charging facilities. Home office spaces and excellent digital connectivity are also a key part of the equation.

These last features have come to the forefront of people’s thinking as COVID 19 has forced so many of us to work from home during lockdown restrictions. The current crisis and the level of disruption caused by a microbe has served as a harsh reminder that we face a still greater crisis after COVID in the form of climate change. Governments around the world are calling for a “green” recovery from lockdown in which we take stock of the climate emergency and work towards a new, more environmentally-aware, normal.

Working from home has huge potential to help reduce our impact on the planet. Transport is the UK’s single biggest source of carbon emissions and commuting accounts for 25% of these. Recent estimates suggested that reducing commuting by working from home just one day a week reduces CO2₂ emissions by an average of 370kg a year - the carbon equivalent of around 190 trees. However, that can only work in the long term with well-designed, highly functional, home workspaces.

The question many people ask is “but how much will all this cost?” The answer is that it can be a lot less than you might think and the costs of not designing to a Gold Standard could be much higher over time. Norwich City Council reported that their development was only 10% more expensive than normal procurement and they anticipated lower maintenance costs due to the advanced materials deployed.  Lower running costs also mean there’s less risk of fuel poverty where tenants have to choose between paying the rent or the fuel bills and, consequently, Gold Standard houses enjoy lower void and turnover rates.

Douglas Lumsden, Convener of Aberdeen’s City Growth and Resources Committee summed it up neatly when he said “the real payback will come from quality of life improvements – the provision of a place where a child can do homework, room for an electric wheelchair, a reduction in fuel poverty.” There is ample evidence from around the world that high quality social housing performs a vital role in assisting social mobility and community cohesion which helps reduce welfare and policing costs.

The benefits of Gold Standard housing don’t just apply to social housing and enthusiastic self-builders. Commercial lenders are increasingly aware of the benefits of Gold Standard homes and the most efficient housing has started to attract mortgage discounts from mainstream banks like Barclays. This development has not been lost on the larger housebuilders who are actively embracing higher environmental standards. The Department for Business, Energy and Industrial Strategy’s “Green Finance Initiative” has called for incentives to boost the green lending market for housing. Then, of course, there’s the EPCs that now form a key part of home surveys which mean that resale values of Gold Standard housing will stand up well in an increasingly energy sensitive economy.

Consumers are forging a path to a greener future and are increasingly factoring environmental concerns into their purchasing decisions. National Grid has estimated that, based on current trends, the UK’s stock of electric vehicles could be as high as 36 million by 2040. If that’s the future of the second biggest purchase of most people’s lives, it is inevitable that they’ll be making similar decisions about the biggest.  Gold Standard homes won’t just help communities rise out of poverty, they’ll help humankind tackle its biggest challenge yet. As architects, we’re enormously proud of the role we have already played, designing homes to meet the Gold Standards and look forward to advancing that standard and creating homes that perform better for people and the planet.